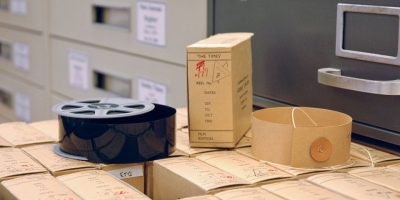 Deteriorating microfilm is turning into a big problem for many local governments, state agencies and businesses. Since acetate was the most common film base from the mid-1920s into the early 1980s, if your organization holds microfilm produced during this time it is almost certainly acetate based. Poor environmental storage conditions, combined with acetate’s intrinsic susceptibility to decay, frequently accelerate the film’s deterioration. Polyester-based film, used after the early 1980s, does not have the same risks of deterioration as acetate film. This document describes acetate-based film, the problems associated with it, and mitigation strategies.

The concept of micro-photography began 1839 and was proposed as a document preservation technique in 1851. Widespread use of microfilm began in the mid-1920s. Companies produced and distributed acetate film between 1923 and 1970. However, supplies were available until about 1980. Apart from microfilm, acetate is also the base for several other types of film media, including professional cinematic productions, amateur still film, x-rays, home movies, audio reel-to-reel, and audiocassettes. The composition of acetate film resulted in complications to the long-term maintenance of this media.

Through the years, microfilm appear on various film bases, including cellulose nitrate, cellulose acetate, and polyester.

Cellulose nitrate-based microfilm is highly flammable, prone to releasing hazardous gases over time, and subject to natural decomposition. By the early 1950s, commercial production of all formats of cellulose nitrate film had permanently ceased.

Cellulose acetate film, also called safety film, is less flammable than nitrate but will still naturally degrade over time. This degradation process is called vinegar syndrome because of the familiar vinegar smell produced by the acetic acid as it off-gasses. Although a great deal of acetate microfilm exists, acetate film is no longer acceptable as a preservation medium.

Polyester is the only film base recommended for preservation microfilming. Black-and-white polyester film has a life expectancy of 500 years under strictly followed storage conditions.

Why Acetate Film Deterioration Is a Problem

Film that deteriorated to the extreme state is unreadable by microfilm devices and may result in expensive reproduction costs or total information loss. Since many important records are stored on microfilm, preserving the information held on the acetate film is not only vital but may also have legal implications. Loss of information is obviously a critical concern for organizations that hold the only copy of certain permanent records.

Identifying acetate film in a highly degraded state is easy. However, microfilm that does not show signs of deterioration is still at risk. The acetic acid and associated gases released as by-products of the chemical reaction are also a catalyst in the further decay of the film. High temperatures and humidity levels can combine with the acetic acid in the film base, causing an accelerated decay. The presence of these substances can contaminate surrounding material, to the point they can damage film and other material not originally in danger. Tight enclosures, such as boxes, drawers, and cabinets compound this problem.

Decaying film begins to “feed on itself,” and the rate of decomposition becomes very rapid. Off-gassing, identified by its vinegar scent, emits a gas that can also pose a health hazard to humans when present in high concentrations.

How to Identify Acetate Film

There are several methods to detect acetate-based microfilm in your organization. A good way to begin is by inspecting the date of production. Film produced after 1980 most likely has a polyester base.

These methods, or a combination of them, provide simple and inexpensive ways to identify acetate film.

Determining the level of deterioration is vital when deciding upon a mitigation strategy. There are immediate measures that will slow decay, but implementing a long-term strategy is also important.

To retard deterioration, separate microfilm by base type. Segregate acetate film from polyester-based microfilm and all other material. You may be able to slow the rate of film deterioration by storing the film in a cool (below 72°F), environment, with moderate relative humidity (20% to 50%). It is important to remember these are only stopgap measures and will not resolve the problem; they will only slow deterioration and prolong usability. For microfilm with a limited retention, this may be a cost-effective alternative.

Refilming: If the original paper records are still available, and microfilm storage is the preferred retention method, simply refilming them from the paper documents onto a polyester-based film may be a cost-effective method of addressing the problem. However, in many instances, organizations destroyed the original documents after producing the microfilm.

Duplication: Microfilm duplication is another potential solution to an acetate film problem. If the film has not decayed significantly, running it though a microfilm duplicator is a possibility. When considering the duplication of a roll of old acetate microfilm, keep in mind that the roll may have other problems (excessive number of splices, weak splices, or poor density or resolution) that make duplication difficult or impossible.

Imaging/Digital Transformation: Advances in technology produce new options for information preservation. If the original paper documents are available, producing electronic copies by scanning is a good solution. If the original acetate film is in good condition, an electronic film scanner can create digital images from a roll of microfilm. eBizDocs helps organizations retain information threatened by acetate deterioration. Its imaging services and equipment sales gives organizations the choice of outsourcing the project or performing the work themselves. In addition to preservation, imaging with data capture can add significant value by making document information available for searching and process automation and integration with other computer systems.

Removing emulsion: A professional conservation lab can remove the emulsion layer from the deteriorating acetate base and place the image on a new, stable polyester base. This method is prohibitively expensive for most organizations but can be a viable solution for single items of extreme value.

What To Do Now

The loss of information, health risks, and possibilities for damage to other records are all acute results of acetate microfilm deterioration. To minimize these risks, you should proceed without delay by following these steps.

eBizDocs is a premier digital transformation provider focused on helping you put information at your fingertips. Offerings include paper and microfilm conversion, content capture and document management solutions, scanner sales and service, and process consultation. eBizDocs is SOC2 Type II certified and serves private and public-sector organizations. The company has been in business for over 20 years and is a preferred source contractor for many NYS entities.